Discover the very essence of Britain on this carefully crafted tour. While you travel in style, enjoy VIP experiences like private visits to Edinburgh Castle and the Tower of London. Meet iconic British characters, including a member of the Royal Horse Guards in London and a Bagpiper in Edinburgh. Stay at only the best hotels and enjoy sophisticated dining, including a signature meal in a Michelin-starred restaurant. This deluxe tour is the epitome of British style!

London - join a local expert to discover Britain’s Capital City, including a private visit to the Tower of London

On arrival at London’s Heathrow Airport, you’ll be met by your chauffeur, who will transfer you in executive luxury to your luxurious five-star hotel overlooking Buckingham Palace and Gardens.

This afternoon is at leisure so you can relax. Why not unwind in the hotel’s spa or enjoy a traditional afternoon tea?

At 6:00 pm, meet your Travelling Concierge and travel companions for a grand Welcome Dinner hosted at your hotel. Savour classic British cuisine and take in the old-world ambience of your surroundings.

Overnight: The Rubens at the Palace Hotel, London (or similar) (2 nights)

After a sumptuous breakfast, it’s time to explore London, one of the World’s greatest cities.

Join a local expert guide for insider knowledge as your tour takes you to see Big Ben, the Houses of Parliament and Westminster Abbey. Continue past Downing Street, the home of Britain’s Prime Minister, Trafalgar Square and Piccadilly Circus.

We’ll stop at the Household Cavalry Museum, where we learn more about the royal uniform - you can even try one on for yourself.

Meet a real-life Royal Horse Guard at the Horse Guards Parade, then stop at Buckingham Palace to view the colourful Changing of the Guard ceremony (if taking place).

This afternoon why not undertake some retail therapy at Harrods, enjoy a walk in Hyde Park or view the masterpieces in the National Gallery.

Tonight dinner is at leisure; your Concierge will be able to assist you with suggestions.

In the evening, once the crowds have gone home, visit the great Tower of London to witness the Ceremony of the Keys. Join a Beefeater warden for this ancient gate-closing ritual, which has been carried out every night, without fail, for the past 700 years.

We leave London behind and travel to visit the ancient stones at Stonehenge, Britain's foremost prehistoric site. This mysterious UNESCO World Heritage site is bound to impress you as it was built without the aid of modern construction equipment.

Later our travels bring us to the sophisticated Georgian city of Bath, where people have enjoyed the healing waters since Roman times. Take a stroll to discover the neo-classical architecture of Royal Crescent and the elegant Pulteney Bridge.

Tonight is free for you to relax and dine as you wish. Why not ask your Tour Director for restaurant recommendations?

Enjoy a leisurely start with a visit to the famous Roman Baths, one of the grandest spas of the ancient world and contemplate how the Romans would have gathered here to take the waters and enjoy the good life.

The rest of today is at leisure in Bath, so you can enjoy the city's many attractions. Bath Abbey is where King Edgar, England's first Monarch, was crowned in 973. If you feel energetic, why not enjoy the views from Bath Abbey Tower, there are only 212 steps to climb, but you'll be rewarded with fantastic views over the city.

Bath has a long literary tradition and will forever be associated with Jane Austin, who wrote Pride and Prejudice.  She lived in the city for 5 years in the early 1800s and set two of her novels here. You can discover more about her time here at the Jane Austin Centre.

Stop in beautiful Bibury, described by the revered William Morris as the ‘prettiest village in the Cotswolds.’

Travel to Burford nestled on the meandering River Windrush, its main street has a collection of honey-coloured stone, chocolate-box cottages and Tudor buildings.

After exploring the tea houses and quaint shops, a leisurely drive brings us to the sleepy limestone villages of Bourton-on-the-Water and Stow-on-the-Wold, two of the most picturesque towns of the northern Cotswolds.

Arrive in Stratford-upon-Avon, the birthplace of the Bard, William Shakespeare, for free time before continuing to York.

We travel in the footsteps of famous characters as we explore the medieval streets of York. Once an important centre of Roman dominance of England, this colourful city is surrounded by a mighty stone wall dating back to the 13th century.

You have a choice of two outstanding experiences today.

Join a local expert for an informative stroll along the historic walls - the longest medieval fortifications in England - and appreciate spectacular views of the River Ouse and the City Centre. Alternatively, embark on a leisurely guided tour to York Minster, the largest medieval cathedral in northern Europe and one of the most outstanding Gothic buildings in the World.

This afternoon travel to Castle Howard, one of the grandest historic houses in Britain. First, you'll be shown to the elegant Grecian Hall where a delicious afternoon tea will be served. When the general public has gone for the day, join an expert guide for a private tour to learn the history of this stately home and see the ornate rooms.

Enjoy a stroll in the extensive grounds before returning to York.

The stunning beauty of the English Lake District famously inspired 19th-century writers such as Beatrix Potter and William Wordsworth.

We board a historic steam train at the Lakeside & Haverthwaite Railway Station for a nostalgic journey along the banks of Lake Windermere. Discover the beauty of Bowness-on-Windermere, a bustling town on the banks of the lake.

After free time to explore on your own, make for our hotel on the banks of Ullswater, one of England's most picturesque lakes.

Tonight visit the atmospheric ruins of Lowther Castle. After exploring the grounds and discovering the history of this 19th Century gem, head to the Sculpture Gallery, which overlooks the Parterre Tapestry Garden, for dinner.

Journey to majestic Alnwick Castle and explore its magnificent interiors.

Join a local expert for an in-depth exploration of the 11th Castle, with its striking medieval architecture so familiar to fans of the Harry Potter films.

If you are travelling on a Chairman's Collection departure (15 April and 9 September 2021), you will meet Her Grace The Duchess of Northumberland, as she personally welcomes you for a private tour of her beloved garden.

You are also introduced to the Head Gardner, Trevor Jones, who will lead you past a labyrinth, the serpent garden and ornate fountains as you listen to the fascinating story of how The Duchess restored this exquisite garden to its former 18th-century glory over the last twenty years.

Admire this masterpiece of passion and dedication, which remains a work in progress, before indulging in a seasonal lunch.

Later, join a local expert for an in-depth exploration of the 11th Castle, with its striking medieval architecture and see why it was featured in the Harry Potter films.

Travel across the border into Scotland and travel to its picturesque capital city, Edinburgh. Today you are free to dine as you wish. Your Travelling Concierge will be happy to guide you to the best local restaurants and attractions.

If you are travelling on the 5 or 19 August 2021 departures, you will attend a performance of The Royal Edinburgh Military Tattoo. Taking place on the Esplanade with the floodlit Castle as a backdrop, it is a spectacular celebration of kilts, bagpipes and tartans.

Today we explore Edinburgh and start with a visit to the impressive Edinburgh Castle.

In the company of a Local Expert, we’ll skip the queue for a guided tour of Edinburgh’s most popular attraction. Learn about the castle’s tumultuous history, see the magnificent Scottish Crown Jewels and Stone of Destiny, and marvel at the panoramic views of the city from the castle ramparts.

Later take a stroll along Princes Street, past the Monument to Sir Walter Scott, then head over to the “Old Town” to see the Royal Mile and the Palace of Holyroodhouse, the official residence of HM The Queen in Scotland.

In true Scottish style, meet a professional bagpipe player, who is said to have been the Queen Mother’s favourite, and be enchanted as you listen to iconic music and captivating tales about Scottish culture whilst enjoying tea and scones.

Raise a glass this evening to new friendships and an incredible journey as we celebrate our finale dinner at Grazing by Mark Greenaway, located in the famous Waldorf Astoria Hotel.

After breakfast say farewell to your travel companions and join your transfer to Edinburgh Airport. Haste ye back!

What can I expect on this Deluxe Escorted Tour?

If you are planning the â€œtrip of a lifetime' where every last detail is taken care of then joining a Deluxe Escorted Tour could be just for you. These amazing tours are the epitome of grand travel. Youâ€™ll travel in a smaller-sized group aboard a state of the art motorcoach with air-conditioning, on-board WiFi, reclining seats and oversized windows. For your comfort there is an emergency washroom on-board too. Youâ€™ll stay at the very best addresses in de-luxe hotels and enjoy fine dining throughout. Special inclusions will enhance your experience such as enjoying a traditional afternoon tea at Gleneagles Hotel or meeting the bagpipe player who was a favourite of the late HM Queen Elizabeth, the Queen Mother. Savvy travellers appreciate that these tours have no hidden extras â€“ all the ingredients needed for an extraordinary holiday are all included in the tour price.

Yes, it is possible to bring a folding wheelchair or walking aid with you. It will be stored in the luggage compartment of the coach whilst travelling.

Please note that this facility is only available if you are travelling with someone who can provide you with any personal assistance you may require while on tour.

The coaches used on extended tours are not adapted with wheelchair lifts, so you will need to negotiate several steps to gain access and egress to/from the coach.

Tour will end in Edinburgh after breakfast on day 10 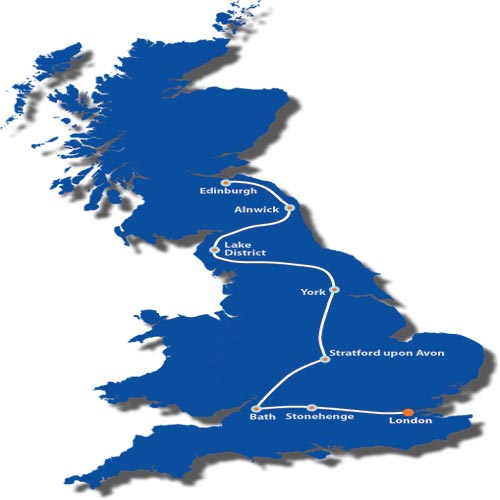